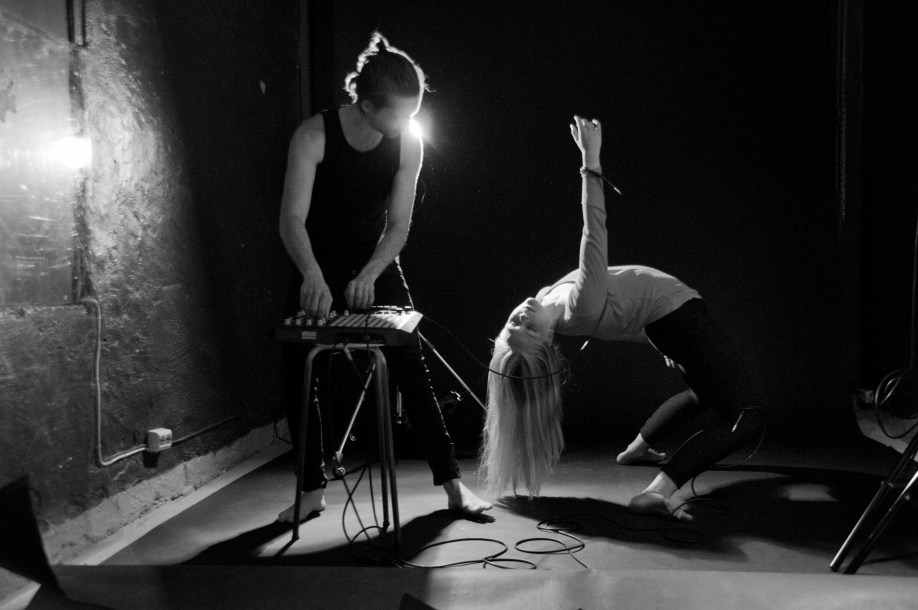 An analysis and discussion of a rehearsal where we explored some improvisation techniques.

To see the exercises from the outside and experience their expression.

I will analyze and discuss each exercise and explain how we prepared and conducted them.

In March of this year we worked on creating clear frameworks for rehearsal purposes, examples of these could be:

Simply just adjectives that we try to express together to see how we interpret them.

Some of them resulted in nonsense, others in nice pieces.

It was quite interesting that we had different interpretation of some of these adjectives since that resulted in contrasts and a broader expression.

For example “hollow and large”, Hedvig interpreted by forming a “ring” with her body, I had expected a more “straight up with arms straight out”.

And of course, it was challenging for Hedvig to interpret these adjectives both trough sound (her sensors) and dance, and then try to combine them.

These are some of the exercises we did:

00:02: Clear start. Could probably have been more fragile as this was the intention.

00:05: I turn on a delay, this might be confusing as it can be hard to tell how Hedvig controls the sound when I also do similar effects. I probably felt that it was too naked, but should have just kept it that way.

00:15: Elegant sensor usage of Hedvig, I even state that orally with a “ja”, unprofessional of me. The fact that she controls a reverb and I keep things so dry is a nice contrast.

00:31: We listen well to each other and give each other space, good. Until now, I think Hedvig elaborates well my intended underlying pulse.

01:07: Hedvig uses the left sensor for the first time, elegant, clear and subtle.

01:07 – 01:22: It is clear that I am not in concert mode, as I should be, I am obviously just trying out different things not thinking enough about the overall structure of the piece, but maybe that is good as I might stumble upon something new that I hadn’t dared to try at a concert.

01:42: I feel the sensor usage here elaborates my intentions, that is great.

01:42 – 01:55: I think I waited and opened up for Hedvig to do the repetition thing again here, as kind of a “trading”-part, but it didn’t come and I unfortunately backed out, and went into a new room.

02:36: As you can see, Hedvig wanted something to happen here, but I didn’t catch it.

02:39 – 02:53: Obvious repeating moves from Hedvig, great, as this was a part of her task. It could easily have lasted longer and/or been developed slower.

03:18 – 03:36: I try to get that trading thing going more than once, since that was a part of the framework (fast interaction). But Hedvig has her mind set at something else, which of course is alright, since this can force new things to happen and me to go new ways.

03:36: Clear sensor usage, Cool! Should have been repeated several times, for example as a part of a trading section.

03:50 – 04:50: Here we have nice interaction. But it could have been faster, as it becomes towards the end, and it could have been clearer that Hedvig actually triggers the sounds that come between my playing. For example by her doing the same movement each time the sound she makes comes, like at 03:36 or at 02:39.

04:50: I should understand that a rehearsal doesn’t have to be this long, especially as I do repeat my self quite frequently.

05:10 – 05:53: When I stay focused and stop playing each time Hedvig uses the sensors, I feel that things work quite well. Still, this way the musical interaction is just one-way. But of course, at this point, our first rehearsal with the actual equipment we where to use, I didn’t expect Hedvig to be even close to this level of compositional consciousness.

05:53 – 08:44: This could have been a piece of a performance, I feel it contains good interaction, fast changes, we give each other space and the structure holds. Especially at 08:18, when we suddenly agree on going slow. Should probably have ended after that part.

In general very elegant and subtle usage of the sensors by Hedvig, as this rehearsal happened quite a while back and we have done several performances after this, I had forgotten that I really liked the flow in this idea and I will try to bring some of it back into our performances. I seem to have forgotten completely the “fragile” factor given in advance. But as this was strictly a rehearsal, it was way too long and too little focused on specific aspects. We had to do it more effectively. So we talked about what we had done, and agreed on doing a short version where Hedvig would not dance and just focus on the sensor usage and we would try to make the fast auditive interaction happen both ways:

This way we force our self to listen well and be as focused as possible.

This works quite well although we tend to stop before the other one starts, we probably do that because we get used to a certain speed for when we should change, that was not the stated framework. When Hedvig uses the “repetitions” sensor, I sometimes try to imitate what she did, maybe it is possible to do that both ways when Hedvig gets to practice more with the sensors? This is a good focus exercise that we should do more frequently. We should probably have a set of warm-up exercises we do before each gig.

Suddenly, as a part of these spaced out spaces, we stumbled upon a more trivial expression we wanted to record. Lately, as we have been getting a quite large variation of audience, this has turned out to be quite convenient to have in our briefcase.

I play in time on a ping-pong delay, Hedvig dance on the beat and the sensors repetition-effect is quantized to the beat.

Well, not a clear beginning, but this was intended just as a record for us to remember it.

It is quite nice, except what happens at 00:42 to 00:44, that is awesome. And the ending is quite cool, you can tell we did the previous focus-trading-exercise before this.

As we already sailed trough trivial waters, I wanted to try another, more stretched beat:

This works alright, should probably have some more musical elements going when doing this, a sub-bass for example.

I like how Hedvig uses the sensors to open up the beat from time to time.

This kind of ideas will probably be a cradle for the creation of a more club-like concept that we have been thinking about.

We choose two parameters each.

I feel that the idea might be to shallow, we should try to do it the other way around: I play rapid when Hedvig is at the floor and slow when she is up. This solution is just too obvious, so obvious that it had to be tested.

I apparently understood that I could use the computer to enhance the tasks given in the framework. That is good.

00:43 – 01:18: Here Hedvig use the sensors very smoothly and it is obvious that the sound is connected to a specific movement. And we also give each other space as rehearsed earlier, but it can still improve, particular from my side.

01:41: Change of parameter comes quite obviously, still I don’t manage to do it fast enough and it fades over instead of a sudden change, maybe that was what I wanted, but it doesn’t look convincing.

02:51: I seem to be going somewhere else than planned, combining the two parameters. I don’t remember why. I should have stayed to the plan since this is a rehearsal. Sounds alright though …

03:15: Hedvig is obviously fed up with me fooling around, so she maturely decides that the exercise has finished. Good!

03:28: That was a quite cool usage of the sensors, to really determined throw the sound quickly away. If I just had seen or heard it coming and muted everything. We’ll have to rehears that.

Since this is a rehearsal we wanted to streamline the exercise and decided to change faster and simultaneously between the parameters.

This turned out quite clear and concise. Yet the changes are not instant.

Maybe we should have an auditive or visual cue for the change, which could also actually enhance it.

00:24: As you probably see, this exercise seem to be quite physically challenging to do for a dancer.

00:30: We are quite in sync here. Even though Hedvig isn’t on the floor until 00:36, but as stated, that was due to the physical nature of the exercise, or a knee injury or something like that.

These were good exercises. Even though we had to define them by doing them some times, they resulted in a deeper understanding for what we are actually doing.

As I wrote some times in this texts, some of these exercises we’ll have to do again since the progression from each time doing it was very clear.

We should also engineer a warm-up routine implementing some of these exercises as they proved to enhance our focus and interplay.

0 comments on “Exploring improvisation techniques with dance, drums and electronics”

1 Pings/Trackbacks for "Exploring improvisation techniques with dance, drums and electronics"